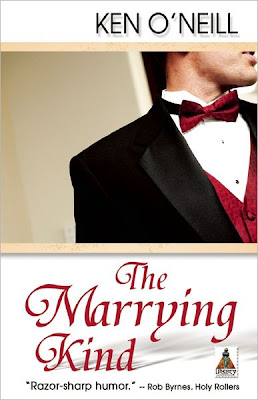 Very topical, this book couldn’t have been released at a more appropriate time considering the recent gay marriage debacle in North Carolina (my home state).
This is the story of Steven Worth, a charmingly neurotic columnist that works for The Gay New York Times (one of those freebie newspapers they give away in gay bars) and his wedding-planner boyfriend, Adam More. They’re a happy, well-dressed couple, living in a nice apartment in NYC with their two kids (cats) and few problems.
Adam begins to seem depressed which really worries Steven but he doesn’t know how to approach the subject. So, he lets it slide for a while until Adam rushes home from work one day, all aglow and flushed with excitement. Adam makes a pronouncement that he’s giving up his business of heterosexual wedding planning until he and Steven can legally be married in New York.
Although worried, Steven gets all charged up over the subject and writes a few compelling pro-gay marriage articles for The Gay New York Times and before you know it, Adam and Steven become local heroes to the gay community and a movement begins to take shape, protesting heterosexual marriage and boycotting weddings until gays have the right to legally marry.
Things are going great until Steven’s (straight) brother asks Adam’s sister to marry him. Herein lies the trouble, Steven is extremely close to his brother and it tears him apart that Adam expects him not to attend his wedding just based on the principle of the whole matter. What if the gay community got wind of the fact that the people that started this anti-wedding movement actually attended a heterosexual wedding? They’d tear them from limb to limb for sure and be shamed in the press.
Finally, Steven is so miserable that he leaves Adam after telling him that he was most definitely going to attend his one and only brother’s wedding and if he were smart he’d do the same thing.  Will Adam stand firm to the principles of his movement or will he show up at the church in the nick of time to see his sister wed Adam’s brother?
A wonderful, funny, touching book!
If you care anything about gay rights and gay marriage, do yourself a favor and read this book.
Rating: 9.0
Posted by KenPaul66 at 8:59 PM