Men Under the Mistletoe 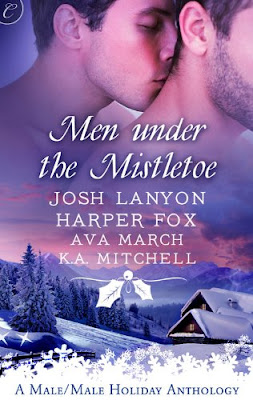 I really liked this year’s Christmas anthology by Carina Press. You’ve got four very different stories of gay men during the holiday season.
The first story is:
My True Love Gave to Me
By
Ava March
This is the story of Alexander and Thomas, two early 19th century boys that are trying to have an affair and finding that convention and family obligations are quite the hurdle to overcome. If you're like me, you've probably wondered what it was truly like for gay men "back in the day" and how they carried on their love affairs. I think this story goes a long way in helping us understand more about that. I mean, what did they use for lube back then, goose fat or butter ?
Alexander’s breakdown when Thomas leaves him high-n-dry at the country house had me balling my eyes out at the sheer amount of pain poured into those passages.
The second story is:
Winter Knights
By
Harper Fox
This is the story of a gruff, Englishman named Gavin that’s on holiday in Northumberland waiting for Piers (his lover) to show up so they can spend the Christmas holidays together. Things turn ugly when Piers calls and breaks up with Gavin because of his religious convictions. In grief, Gavin dashes out on the snowy moors for a “hike” to clear his mind and promptly falls down a deep crevice into a cave and hits his head.
What follows can only be described as haunting and miraculous.
The third story is:
Lone Star
By
Josh Lanyon
I was really looking forward to ready this story because I really love Josh Lanyon’s characters. His men are the kind of guys that I’d personally want to date.
This is the story of Mitchell, a disenchanted ballet dancer from NYC that goes back “home” to Texas to deal with his father’s estate when he passes away and also to get away from his cheating bisexual boyfriend. When he’s almost home, a reindeer runs out in front of him and causes him to drive an embankment and crash his rental car. The Texas Ranger that comes to investigate the scene turns out to be his old boyfriend, Webb.
Webb helps Mitchell to discover that he’s not so disenchanted after all.
The forth and final story is:
The Christmas Proposition
By
K.A. Mitchell
I think I liked this story most of all because of the main character’s quirky, smartass attitude and witty repartee.
This is the story of Mel, a nice guy running a Christmas tree farm in rural Pennsylvania.
For the most part, Mel has put his personal life on hold and really just concentrates on his life on the farm and taking care of his sister that just got out of drug rehab. One night when Mel is at his part-time job slinging hash at a local diner, there at one of his tables is Bryce, the former love of his life (though Mel would be hard-pressed to admit it). They get back together and what follows can only be described as steamy.
Mel and Bryce have a very physical relationship and seem to fuck all the time. The author seems to take a particular joy in using the word “dick” and “cock” repeatedly. Not that I’m complaining, mind you. This story was waaaay hot and total boner city.