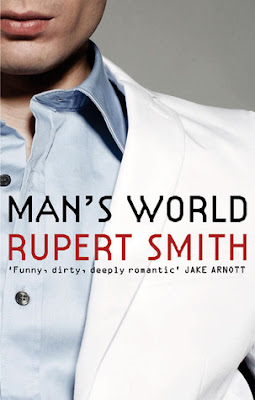 I absolutely adored this book! This is the story of two different gay guys in Britain whose stories become somewhat intertwined.
First we start out of the story of Rob, a muscular, modern day party-boy who’s rather shallow and not all that likable until the waning chapters of the book. Rob battles rampant drug and steroid use, hepatitis and repeatedly bats away the interest shown in him by the "nice" guy at his office before he begins to finally exhibit signs that he's more than your average gym bunny.

One day Rob and his even shallower best friend, Jonathan are looking off his balcony and notice the paramedics lugging a stretcher baring an obviously deceased man from a downstairs apartment and that leads us into the next story:

The story of Jonathan's downstairs neighbor, Michael Medway, a gentle young man in the RAF during the fifties who read muscle magazines and sketches scantily-clad men in a secret notebook when he thought no one would notice. From afar, Michael fell in love/lust with the camp’s champion boxer, Mervyn Wright and eventually they do strike up a casual friendship and become intimate one weekend in nearby Blackpool though Mervyn isn't quite ready to be a full time "queer".
I really liked that this book tackled ageism within the gay community. As a middle-age gay man, this is a subject that’s near and dear to my heart. Michael’s flamboyant, campy friend, Stephen said it best when he tells Jonathan that the young, hip, hot gays of today didn’t invent gay, it was fought for and served up to them on a platter by the "old queens" they secretly revile and want nothing to do with.
As Stephen would say, “My dear, I was sucking cock before you were even a tinkle in your father’s eyes.”
If you want a well written, very bold gay novel, grab this book (or download it because I don’t believe this was released in the US in book form) now! Immediately after reading this book, I went to Barnes & Noble’s website and tracked down Rupert Smith’s back catalog, hopefully his older book will be just as good as A Man’s World.
Rating: 9.8
Posted by KenPaul66 at 7:42 PM